We have had another fantastic Peak District wander today and once again we recorded the route using Social Hiking. We originally headed out into the Peak to drop off some Subaru parts that I had managed to get rid, we started off at Hadfield visiting some “League of Gentlemen” filming locations but it inevitably turned into another walking adventure and route plotting afternoon. 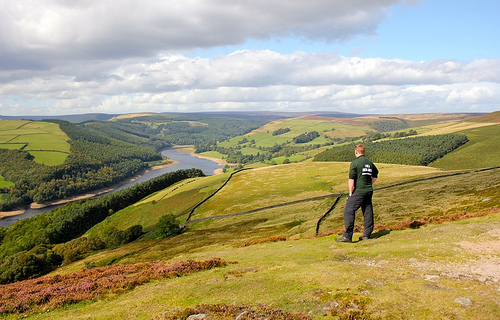 I had walked a very similar route to this a few weeks ago, you can view the route in question here on my website or here on the Social Hiking website. As we had limited time today we decided to do a shorter version and start from the same point at Ashopton Viaduct. The first port of call was Whinstone Lee Tor which today due to the aftermath of Hurricane Katia was an extremely windy little climb. The wind persisted all the way along Derwent Edge to Dovestone Tor and Back Tor. We eventually headed down to Derwent Reservoir and it was a welcome relief when descended as my ears were hurting from the constant buffeting by the wind.

Apart from the blustery conditions we were treated to some fantastic weather, it was really nice for the majority of the walk. As you can see from the image below I did have to break out my new waterproof jacket, It rained for the last 20 minutes or so before we reached the car. My new jacket is a Berghaus GORE-TEX

Can often be spotted Walking, Wild Camping and Cycling in the #GloriousPeakDistrict and beyond while videoing things for YouTube along the way. View all posts by Dean Read

This site uses Akismet to reduce spam. Learn how your comment data is processed.

My Tweets
Join 3,480 other followers
Follow PeakRoutes.com on WordPress.com